Not only CAN you use Epsom Salts with any Equi Cool Down product (since they are washable) – we encourage you to try! How? Just dissolve a little Epsom salt in water – wet, wring and wave! With the body wraps or other larger products simply add the dissolved Epsom salt to a spray bottle with water and spray under the wraps.

But do you know WHY equestrians love using Epsom salt? We asked our good friend and ECD fan, Dr. John von Kieckebusch to explain: 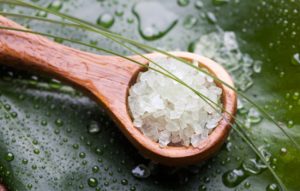 The Benefits of Epsom Salt for Horses

Epson Salts (Magnesium sulfate) is useful a useful mineral with numerous benefits. Due to its saline properties, it can be absorbed into the skin, as well be used to treat colics and hoof abscesses. It can also be used IV is used to treat cases of anti-arrhythmics in equines. Magnesium Sulfate in IV form is used to treat ventricular tachycardia and in the management of ventricular arrhythmias not responsive to other antiarrhythmic agents. In foals, it is used to treat perinatal asphyxia syndrome.

Magnesium sulfate is commonly used as a laxative and a wound soak for horses. It is reported to be very useful in significant and lasting reduction of pain in the horse’s limbs. Magnesium sulfate paste is sometimes used as an agent in drawing boils and carbuncles. Used in soaking wounds, it helps clean and soothe the tissues and skin.

Magnesium sulfate may also be used as a supplemental source of magnesium in the diet of horses.

Magnesium is a vital macromineral, and it is becoming increasingly recommended by veterinarians for various treatments in the horse.

Magnesium sulfate (Epsom salt) is also highly available to the horse for absorption, but it also has an effect of drawing water into the bowel and causing diarrhea, so it is not recommended for daily use.

Magnesium helps protect against inflammation and free-radical damage. What shows promise in the field of veterinary medicine is the link to the protective role of magnesium against damage from endotoxins. Horses with colic that results in endotoxin release or laminitis are known to often have low blood magnesium levels, and there is hope that treatment with magnesium during these critical times may decrease the amount of damage that occurs.

Within the muscle, calcium and magnesium work antagonistically, calcium causing muscle contraction and magnesium inducing relaxation. If there is not enough magnesium, muscles tend to spasm. Although the presence of low magnesium in the muscle tissue may stem from a genetic disorder rather than dietary quantities, there are reports of horses that have responded to magnesium supplementation for treatment of chronic tying-up.

However, the role of magnesium in nerve excitability has been established as a problem when synchronous diaphragmatic flutter occurs. Synchronous diaphragmatic flutter involves spasmodic contractions of the diaphragm and is usually seen in endurance horses with electrolyte imbalances. The condition is also known as thumps. Treatment with calcium and magnesium has been found to speed recovery.

Magnesium is found to be a calming agent because of its role in both nerve excitability and muscle contraction, and the suspicion that nervousness may be caused by suboptimal levels of magnesium in the diet.

Dr. John von Kieckebusch is a graduate of Oklahoma State University School of Veterinary medicine. John’s love of horses began at a very young age when his father purchased a pony for him when he was seven years old, and he has been riding and working with horses ever since.

In his free time, John enjoys riding horses, playing golf, traveling and spending time at the beach with family and friends.